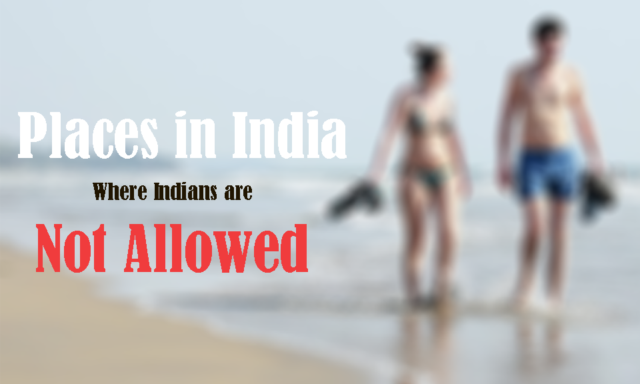 It rarely gets heard that the people are forbidden to go to someplace in their own country. From the title of this post, the first thing that will come to your mind is that India is a country where all religions live here happily together. Can this possibly be here? The answer is yes. There are some places in India where Indians are strictly restricted.

India’s places where Indians are Banned

Uno Inn Hotel is a Japanese-based hotel. Here only Japanese people are welcome. In one incident when an Indian goes there then they refuse to serve the Indian. According to the hotel owner, Indians behave uncivilized. In this hotel, non-Japanese are not allowed.

Why Indians are not allowed in Free Kasol Cafe

Kasol cafe is fallen in the Kullu district of Himachal Pradesh. Kullu Manali is a world-famous hill station where thousand of visitors comes every year. The thing to ban Indians in free Kasol cafes came in front of everyone in 2015. A girl claimed that this cafe is not welcoming Indians.

When visitors go there to confirm the matter after going there, the owner says about the girl’s controversy that she is misbehaving and spoiling the atmosphere of the cafe, so she was asked to leave. The restaurant owner says they have not banned Indians and they have welcomed everyone. The owner says they are also Indians, so then how do we do so?.

The owner of the free Kasol cafe refuses to accept all the allegations. Some people from out of cafe say they welcomed everyone and a few of them says they only serve Israel food and made their cafe setup accordingly. Well, It was a rumor that Indians are not welcomed in free Kasol cafes, and anybody who wants to taste Israeli food can come there.

Broadland lodge in Chennai is working with the Only Foreign passport policy. In this lodge only can stay who have foreign passports. They do not serve Indians who don’t have passports. This lodge comes to light when they refuse to stay in India in 2010.

Goa is one of the great places to enjoy holidays. There are so many beaches in goa where can enjoy a great time. In goa, you can do boating, swimming, diving, cruising, and many more adventurous activities. Hardly, Few of you have heard about the Foreigner-only beach in Goa, where Indians are strictly prohibited.

In fact, the owner of this place has done this so that the privacy of their guest can be maintained. They just wanted to make them comfortable. According to the owner, Indians make a foreign girl uncomfortable on the beach. They teased them with strange eyes while wearing a swimsuit and bikinis on the beach.

Puducherry foreigner-only beach has the same story as goa. The owner of the beach not allowed any non-foreigner in his place. He has strictly restricted Indians here.No Indians are allowed to stay on a beach that is exclusively for foreigners. They do not serve Indians according to the policy of this place.

Why Indians are banned in Lakshadweep beach

In Lakshadweep, there are 35 beaches this time. This place is known for its blue crystal water, and sandy beach, and has many places to explore. Most of the beaches of Lakshadweep are open for all either Indian or non-Indian. Where some of them are Indians restricted.

This island has been in a lot of controversies. You must see that a few months back #Savelakshdweep hashtag trends on Twitter. The reason for this was that the people of Lakshadweep and Kerala were opposing some laws of the Government of India. In fact, people here are protesting due to the planning of the scheme and other new laws by making the issue LDAR.

Norblulibka cafe is not much famous cafe. This cafe is situated in one of the popular hill stations of Himachal Pradesh. The place is full of authentic views, surrounding mountains, rivers, monasteries, and waterfalls.

In Norbulingka cafe, only Tibetan food is served. Food includes veg, non-veg momos, Thukpa, mutton momos, and other Tibetan food items. They do not stop anybody to visit there. Those who want to taste Tibetan food will be welcome there.

Andaman is a union territory of India. In spite of that Indians are also not allowed to there. One and the only reason is that it is not safe. Now the question arises here Why north sentinel island is not safe?. The reason is only indigenous tribes live here. Along with India, these people are cut off from the rest of the world. Every time someone has tried to provide help here, either he was killed or injured.

15 best tips :How to travel on a budget