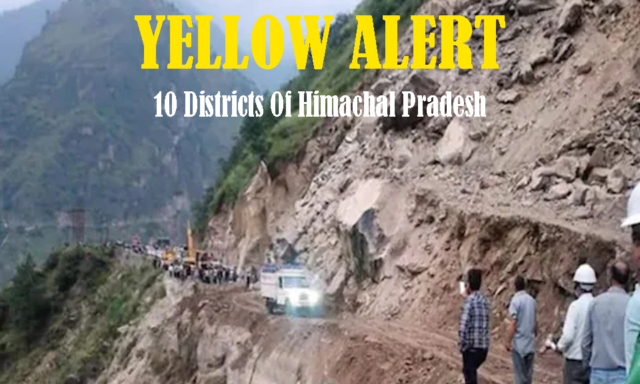 Himachal Pradesh is a state where tourists keep coming and going throughout the year. Some people visit here after planning Where some people have not done any planning. In such a situation, they have to face a lot of difficulties during the trip.

We suggest you here make proper planning and gather information before visiting Himachal Pradesh. Especially when you are planning to visit hill stations like Himachal Pradesh during the rainy season. First of all, it is necessary to know about the weather there.

Yellow alert in 10 District of himachal pradesh after Landsliding

The weather condition of Himachal Pradesh is going bad from the day Tuesday. The locals and tourists are facing lots of difficulties due to heavy rainfall from Wednesday morning. Landsliding reports are happening from place to place.

There are many districts of Himachal Pradesh where the chances of landslides are frequent. Every year in the rainy season Himachal wears loss of life and property due to the cracking of mountains.

According to the meteorological department, there is the possibility of heavy rainfall in Himachal Pradesh. In such a situation, the Himachal government has announced a yellow alert in these 10 districts.

The alert is issued for these districts of Himachal from 7 September to 11 September. The district are Chamba ,Kangra,Hamirpur,Una ,Bilaspur,Mandi,Kullu,Sirmour,Shimla,solan.

Must read the below information before visiting Himachal Pradesh

• Shimla Kinnaur highway no. NH-5 was closed on Monday due to landslides. Now it is all cleared by the PWD department.

• Himachal government suggest you stay away from rivers and dams because of water level increased due to heavy rainfall.

What to see on the Western coast of India?

Beautiful and Historical Kangra Fort in Himachal Pradesh – How To Reach Here And...

What will be the cost and best time to visit Andaman...